Home » Nature & Environment » Lionfish in St. Lucia and Why You Should Order it for Dinner!

Lionfish in St. Lucia and Why You Should Order it for Dinner!

We recently had the pleasure of going into the kitchen with Chef Michael of the Rainforest Hideaway restaurant in Marigot Bay – previously named one of the top 10 restaurants in all of the Caribbean to learn more about the Lionfish and how they serve it up on their dinner menu.

But firstly, let’s cover a bit of background to learn more about this “Lionfish” and why it should be on the every Caribbean restaurant’s menu.

What is the Lionfish? 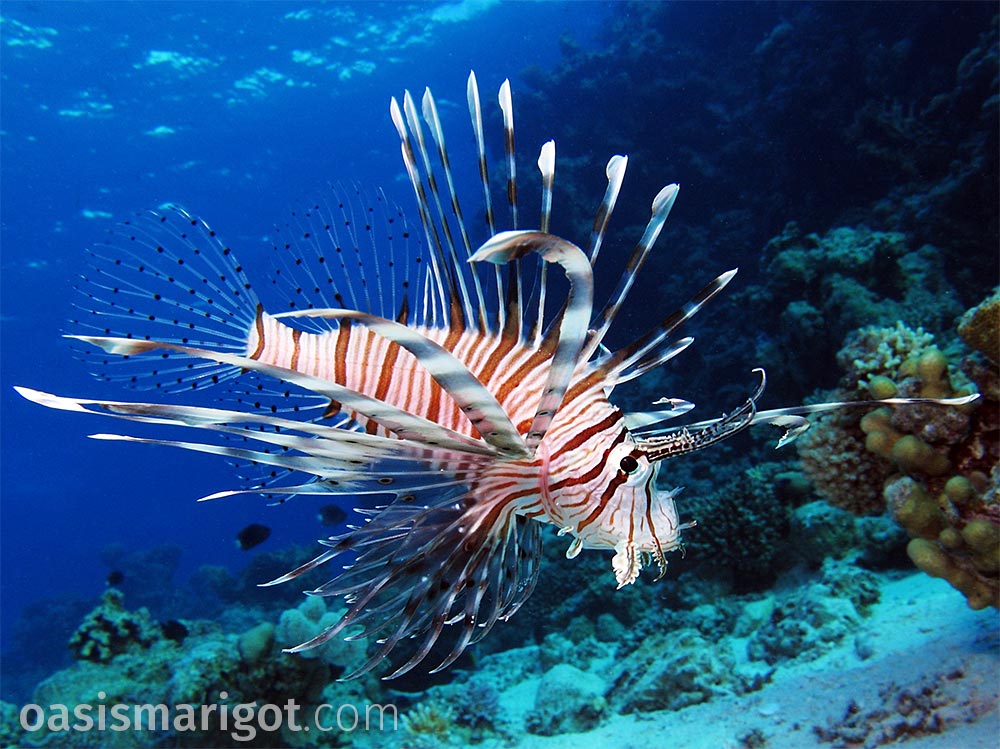 Lionfish is an invasive species in the Caribbean with its natural habitat being the South Pacific. The Lionfish was first brought into the area as part of the pet trade (as invasive species usually are) which was then released at some point only to populate throughout the Caribbean and all along the Atlantic coast of the United States up to as far as Rhode Island!

The Lionfish is beautiful to look at, but watch out – those flamboyant fins have many venomous spikes, or quills that if encountered, inflict pain similar to that of a jellyfish.

Good-to-Know Tip: if you are ever stung by a Lionfish (although very unlikely unless you’re a chef or are trying to pet one while snorkeling) there is a simple remedy. Heat. Yes, heat effectively neutralizes the toxin. So if you’re stung on the arm, just run hot water (as hot as you can without burning yourself) over the inflicted area on the skin to virtually immediately alleviate the pain. If you don’t have hot water, you could even use a lighter (but again, don’t burn yourself) or even the hot/warm water that spews out of the back of a boat’s outboard engine.

Why is Lionfish a Problem?

The Lionfish has been a terrible plague to the Caribbean especially, being called the worst invasive marine species in history. With reefs already suffering from climate change and bleaching, Lionfish are predatory fish that feed on smaller reef fish. They’ve been known to wipe out entire reef fish populations. The problem is that here in the Caribbean, the Lionfish has no natural predators, so they’re going on eating and reproducing unchecked. Actually, it’s said Giant Grouper can be predators to Lionfish, but there are no longer sufficient numbers of them here in the Caribbean to really make a difference. The situation is similar to that of the invasive Burmese Python reeking havoc in the Florida Everglades. 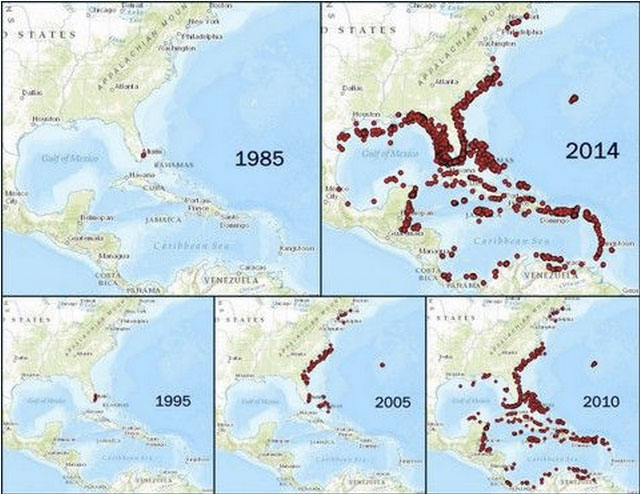 What Can Be Done?

Already some fish markets and even supermarkets in Florida and other states are offering Lionfish, but unfortunately here in the Caribbean, it’s not being offered enough on the menu. But you can help change that. As visitors to St. Lucia and other Caribbean islands, if you bring the demand for Lionfish, restaurants will respond. If more restaurants start asking for Lionfish, local fishermen will fish it more – since after all, they only fish what sells. And actually, Lionfish is a pretty easy catch and sells for about $8 EC/pound which is a pretty good price for the local fishermen. The problem is that not enough restaurants are asking for it. And as Chef Michael tells us, it’s because it requires a bit more preparation time for restaurants, and also because some people have a certain fear of eating a “poisonous fish”.

But Wait! It’s Venomous -Not “Poisonous”

Ah, so there’s a difference! Some people still have a hesitation to eat a fish they see as being “poisonous”, perhaps not trusting that the fish will be safely prepared and that there’s some risk to them getting poisoned. But, that’s simply untrue, and actually, Lionfish are venomous – not poisonous, and yes there’s a difference.

A Lionfish has venom in its quills. But unlike a Puffer Fish for example, it is not poisonous. Meaning, if you just cut off all the quills, it becomes just like any other fish. Furthermore, venom (such as that of the Lionfish or even a snake) is not dangerous if ingested – unlike poison. Venom is only dangerous when it enters the bloodstream through injection. 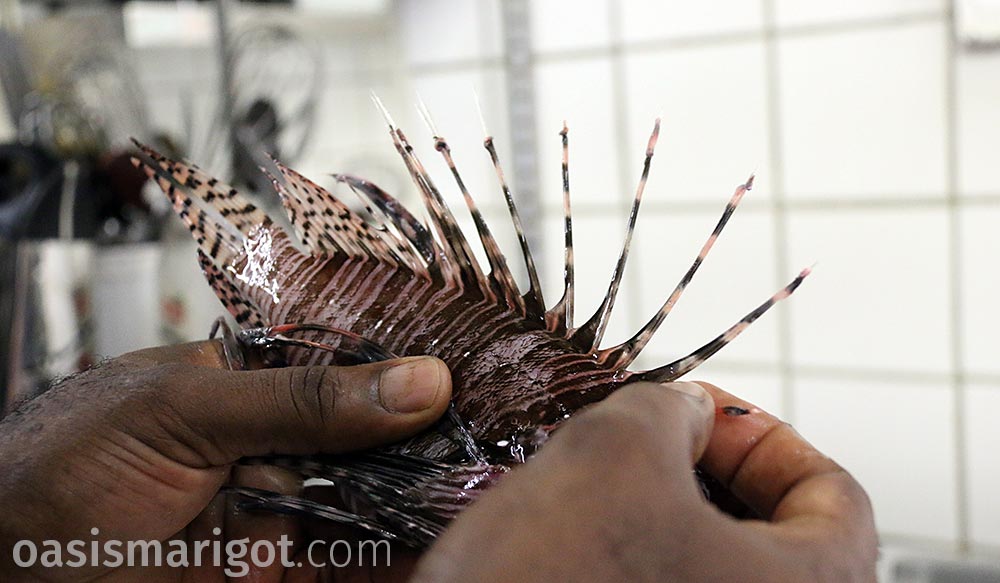 The bottom line is that there really should not be anything holding you back from trying Lionfish on a menu, and Chef Michael here will show you just how easy it is to prepare!

In fact, this sign up at the Rainforest Hideaway restaurant makes a great case for why you should order it – beyond just its yummy taste! 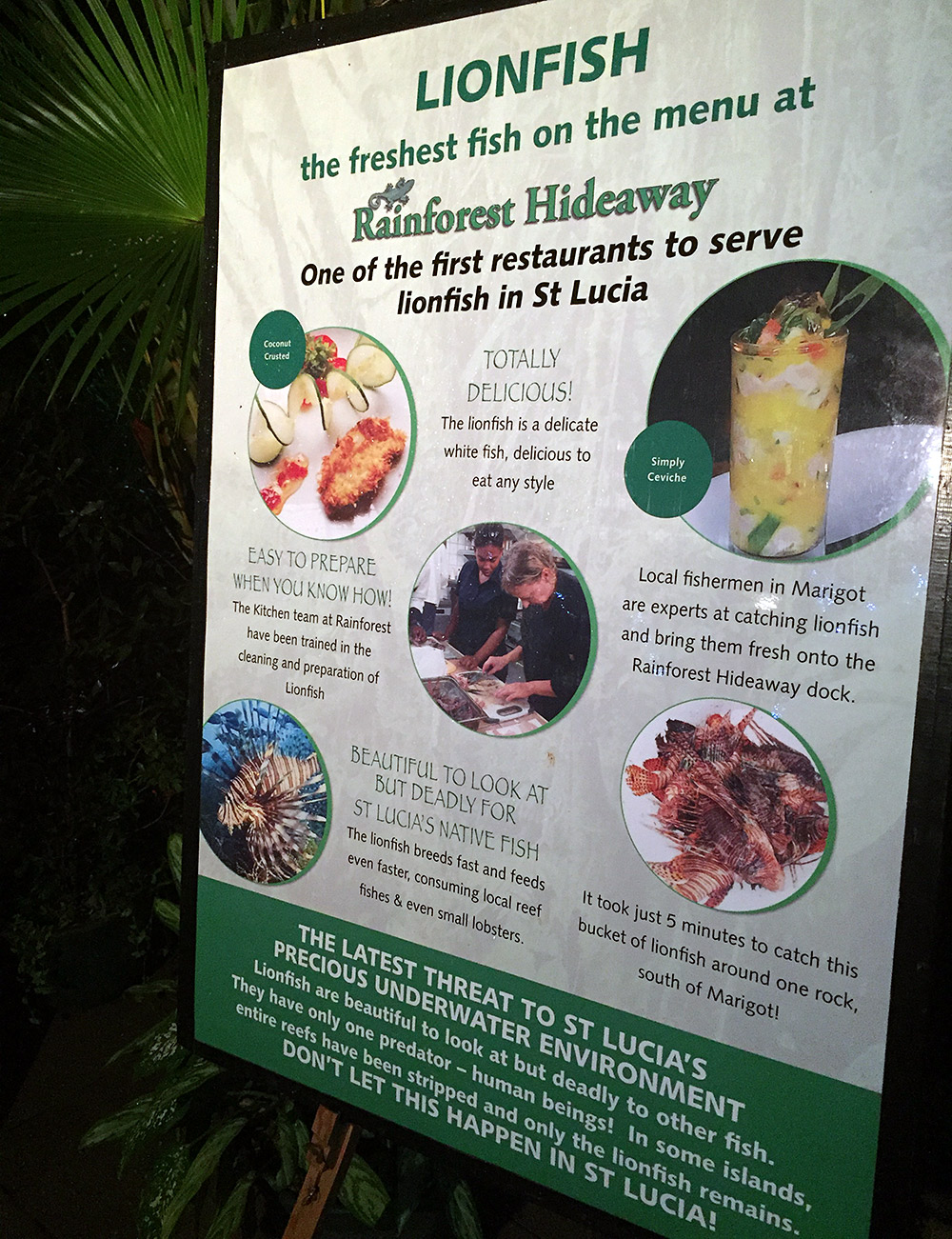 How to Prepare Lionfish

Firstly, we have to give major, major appreciation to Chef Michael and the Rainforest Hideaway for serving Lionfish. They are one of the few restaurants in all of St. Lucia that are putting Lionfish on their menu (in our opinion, all of them should!). Chef Michael has prepared hundreds if not thousands of the fish already, so in our opinion he’s the best person to show us how to do it! 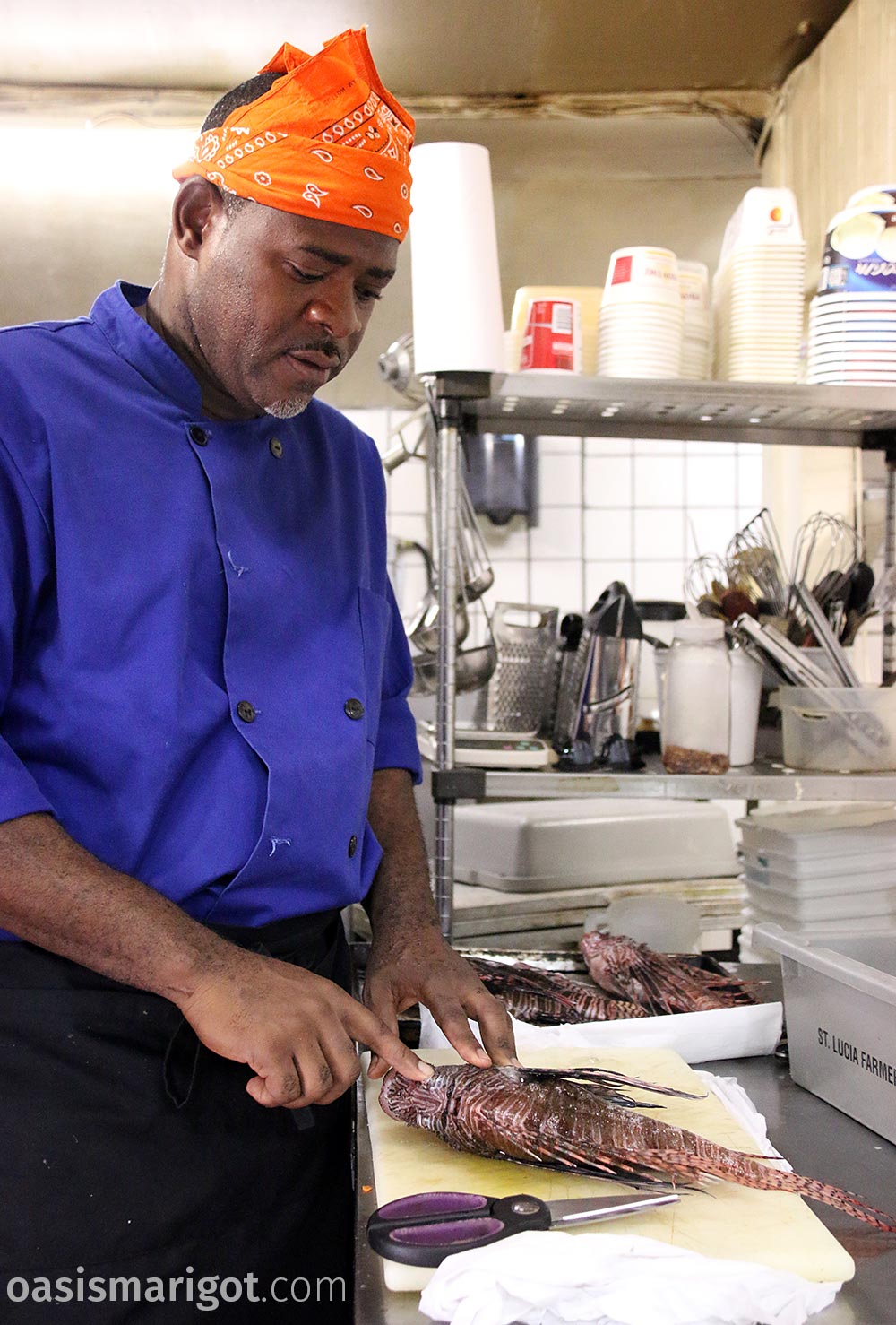 The owners of Rainforest Hideaway are true believers in doing everything they can to protect the local environment, so we can’t say thank you enough to them for “pushing” the Lionfish on their menu and at the same time making it absolutely delicious! In fact, Lionfish is a lovely fish for eating and is on par with any other popular white-fleshed fish out there. It’s light, flaky, and can be prepared in a variety of ways.

Chef Michael says that Lionfish can be very hard to work with when it’s fresh out of the ocean, as the body is soft and loose and it’s much easier to poke yourself with one of the spikes. If you freeze it overnight and then give it a chance to thaw out a bit the next morning before preparing, it adds just the right amount of stiffness to the fish that will make it easier to work with. 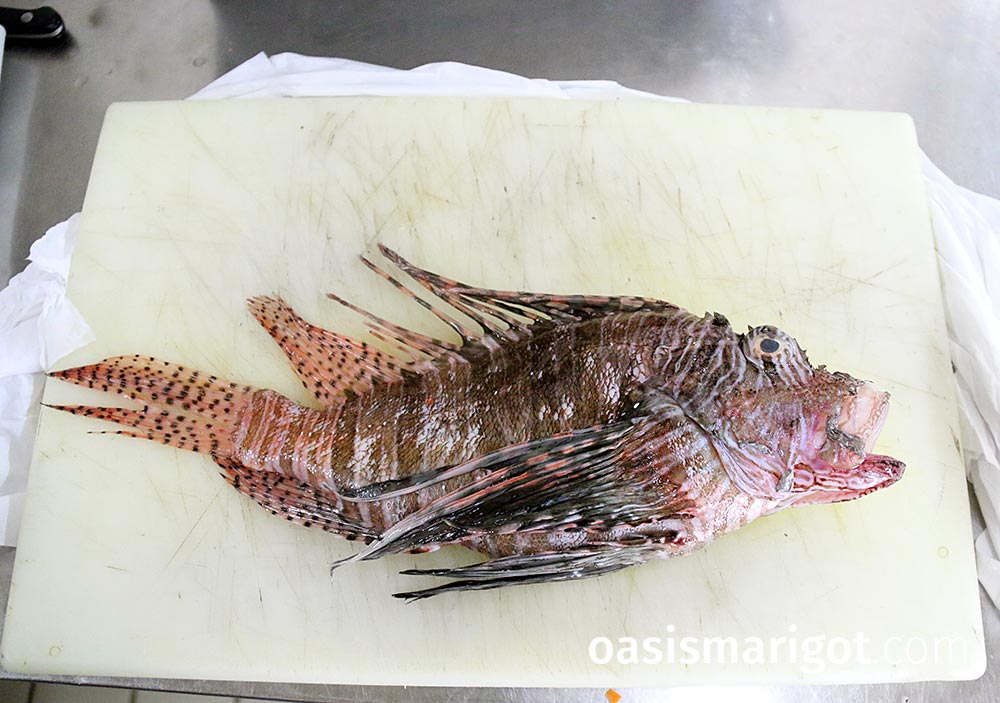 Carefully cut off all the fins and their spikes. The venomous spikes line the back of the fish in its dorsal fin, and the side fins each have one venomous spike. We’re going to leave the tail on for now to make it easier to filet, but keep in mind there is one tiny spike at the base of the tail that you’ll still need to watch out for.

Once you have all the spikes removed (save for the tiny one at the base of the tail), the Lionfish virtually becomes like any other non-dangerous fish. It is perfectly safe to eat, and doesn’t even necessarily need to be cooked (a Lionfish ceviche is supposedly delicious).

So, remove the scales like you would for any other fish. 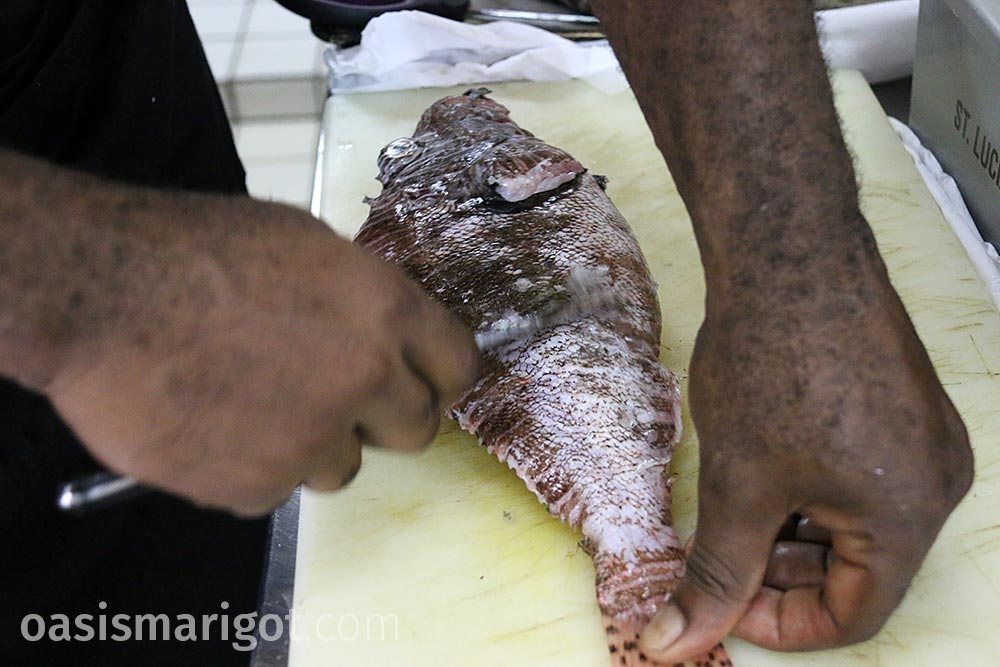 Now you can filet the fish. We won’t get into too many specifics on how to do this because filleting a fish is a whole subject on its own. But, if you’re right handed with a knife, you start with the spine of the fish towards you; place your left hand on its side, and work your way from the tail towards the head. 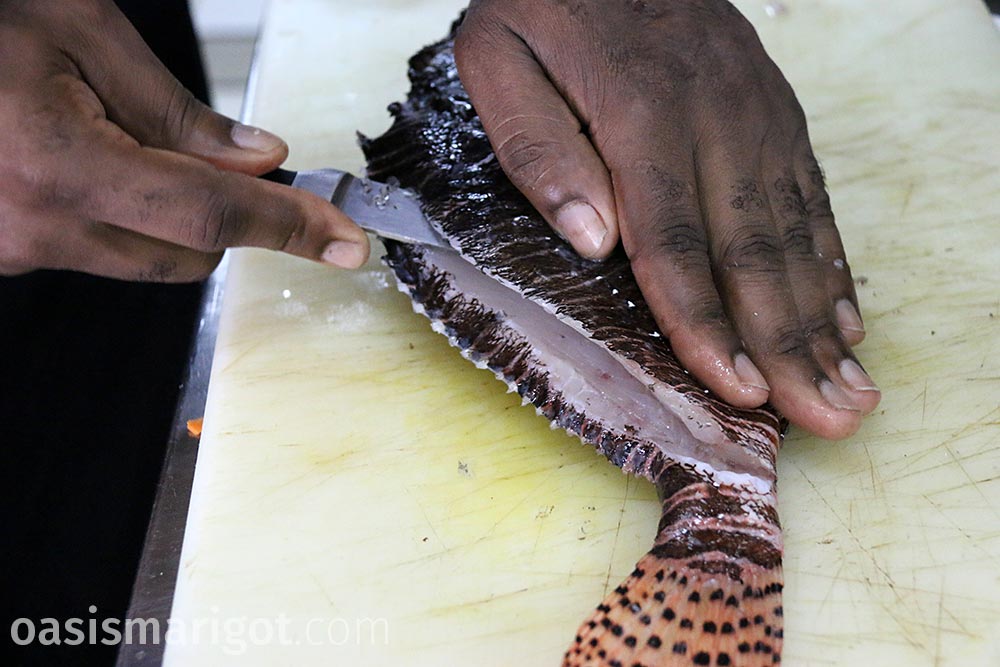 When you reach close to the head, you can vertically cut off the filet from the body just before the gills and head.

For the opposite side of the fish when you flip it over, the spine will now be facing away from you, and you start from the head towards the tail this time. 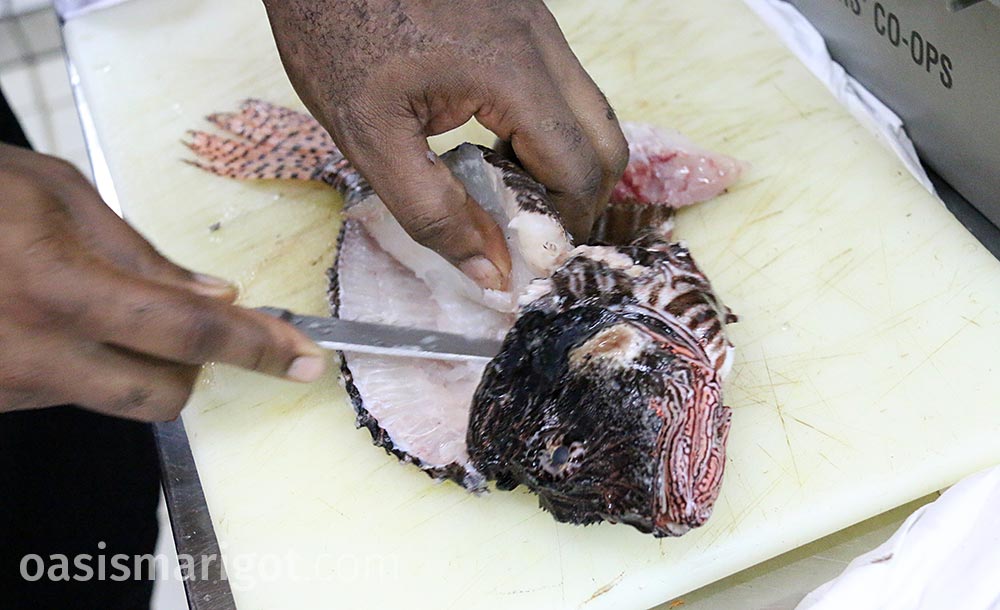 Once you have your filet removed from the body, you will likely feel some bones in the flesh that was closest to the head. There aren’t many, but you can fine-tune your filet but just chopping this small section off, which should leave you with a nice, bone-free filet.

Depending how you want to cook it, you can now remove the skin by pinching the skin down with one finger to your cutting board, and sliding your knife between the flesh and skin. Just push your knife away from you on a slight downward angle while holding the edge of skin in place. The knife will slide through and neatly remove the skin. 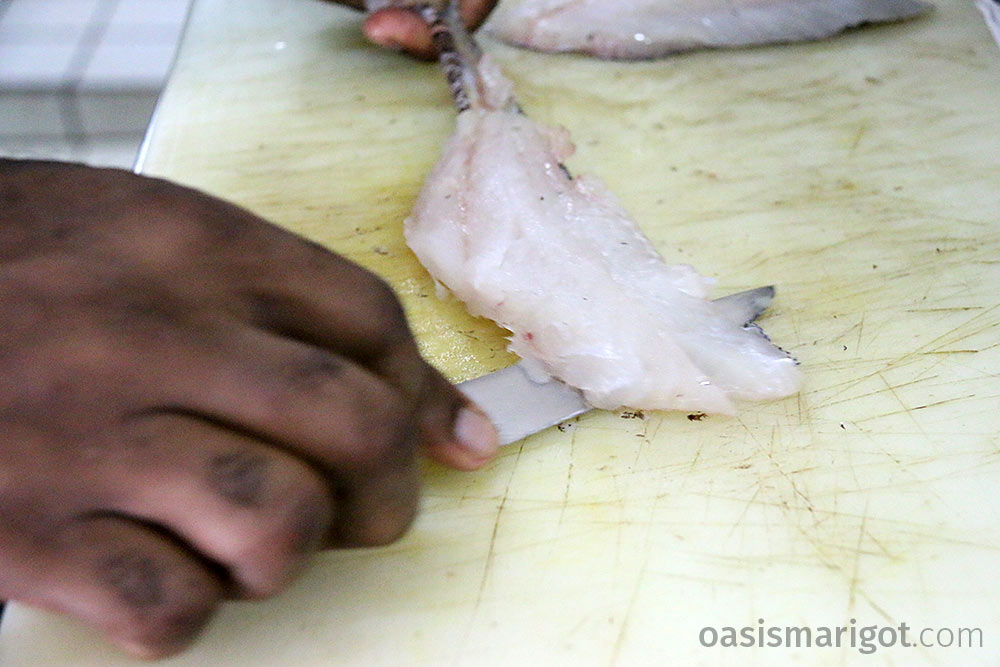 Now you should have your nice filets; a little rinse and they’re ready for cooking! At the Rainforest Hideaway restaurant, Chef Michael likes to serve up fried coconut-crusted lionfish, which is absolutely delectable and which you’ll see in next week’s blog post where we provide our “experience review” of the restaurant. 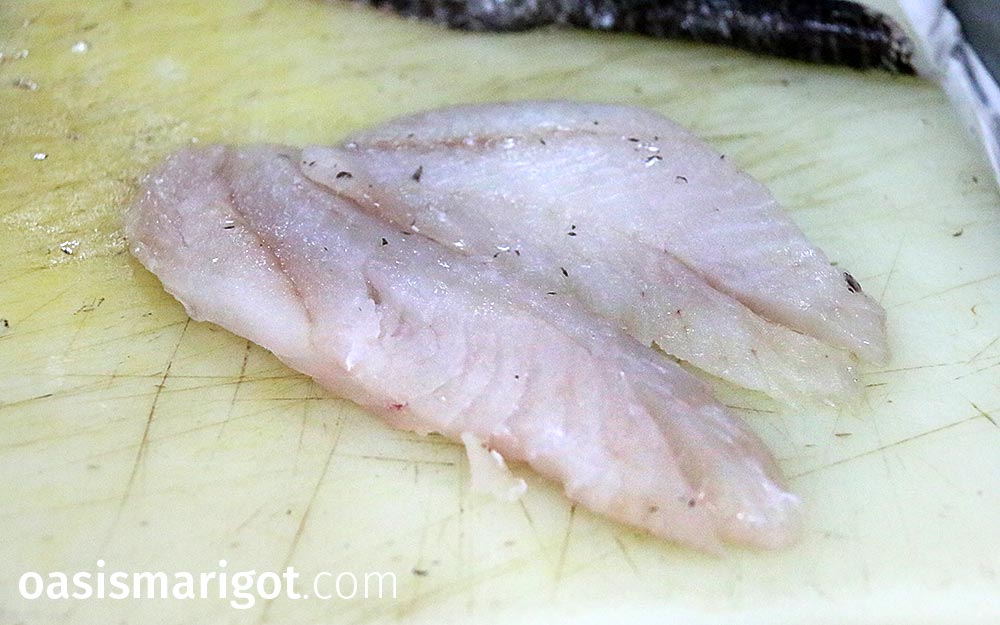 Give it a Try!

It’s really not as scary or as difficult as you might think. I was able to do it on my first try! 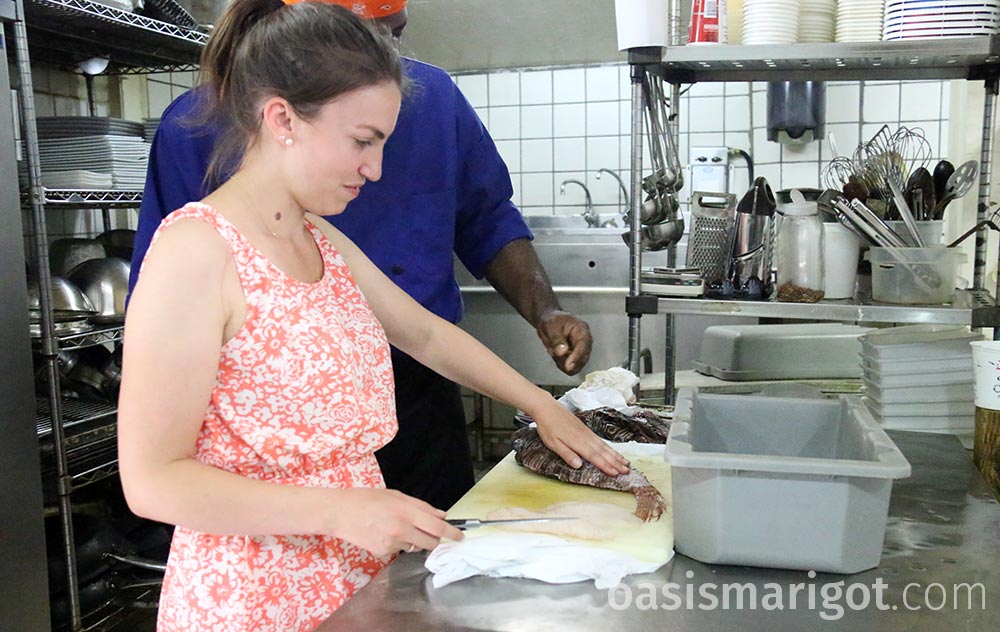 So if you have the opportunity to prepare Lionfish for yourself, great! And if not, you can always order it from the menu! Either way, you’re helping protect the reefs of the Caribbean while enjoying a delicious meal – so it’s really a win-win! 😉

Thanks for reading! If you’ve tried Lionfish before, let us know what you think of it in the comments!