Marigot Bay was once called “the most beautiful bay in the Caribbean” by the famous author, James A. Michener. And it’s hard not to see why – Marigot Bay is unique and beautiful in a way only it can be; rolling ridgelines lush with tropical trees and undergrowth dipping down into the long deep bay of Marigot, with a characteristic palm-studded sand spit that jets out in its middle.

Although there’s a whole history of St. Lucia that we could get into, for this post we’ll just stick to a quick overview history of Marigot Bay.

St. Lucia was first discovered in the 15th or 16th century, and whether it was the English, French, or Spanish who made its first discovery is arguable. But as the first colonization began to happen, and the ensuing battles over the island between the English and French, Marigot Bay began to play a role.

It’s been said that French ships would sail deep into the bay and hide behind the sand spit that jets out in the middle of the bay to escape the British fleet. They would then lower their sales and tie palm fronds to their masts to blend the ships into the palm trees. This way the British would sail right past the bay without seeing the French hiding within. 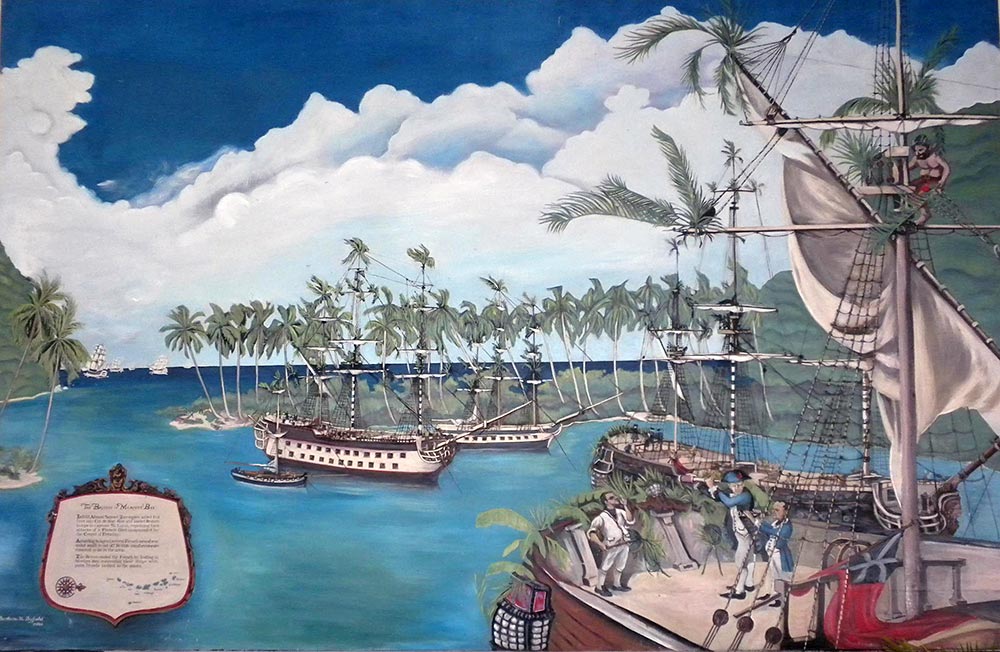 This painting which now hangs in the Boudreau Restaurant, depicts some ships hiding out inside the bay to escape the sights of the enemy fleet out at sea.

To help bring us back in time, here is a photo of the Unicorn, the ship which played “the black pearl” in the Pirates of the Caribbean movie, as it sails into Marigot Bay. 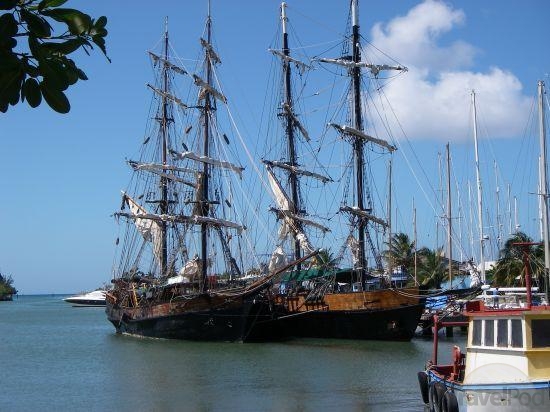 And to this day, the inland portion of the bay forms a “hurricane hole”, helping protect ships from hurricanes and other foul weather.

The bay has developed a lot in the past 30 years especially, but it wasn’t long before that that the bay was pristine and unspoiled as it was hundreds of years ago!

We don’t know the exact date of the below photo, but it must have been early to mid 1900’s that we see a couple locals playing in the water on the beach-side of Marigot Bay. You can see how lush and undisturbed it looks. 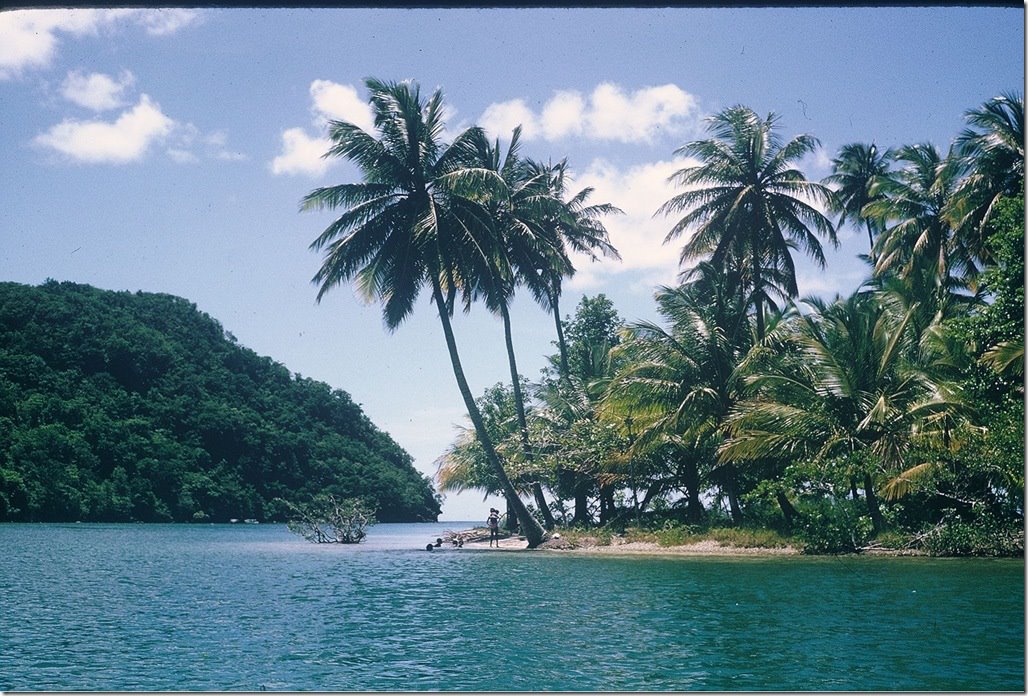 Quite incredible to imagine yourself back in a time like that. Not a single villa, home, or dwelling around.

What we assume must have been shortly after the above photo, in 1967, the film “Dr. Doolittle” was filmed here in the bay. Some businesses in the bay are evening named after aspects of the film (ex: Doolittle’s Restaurant).

Remember the giant snail from the movie?

From that point, Marigot Bay started to become recognized as a paradisaical vacation destination.

We are proud to say that we, Oasis Marigot, were the very first hotel (villa/guesthouse, however you wish to call it), in the bay. Specifically, the red-roofed villas of our “Vacation Club” were the first buildings to be constructed there. 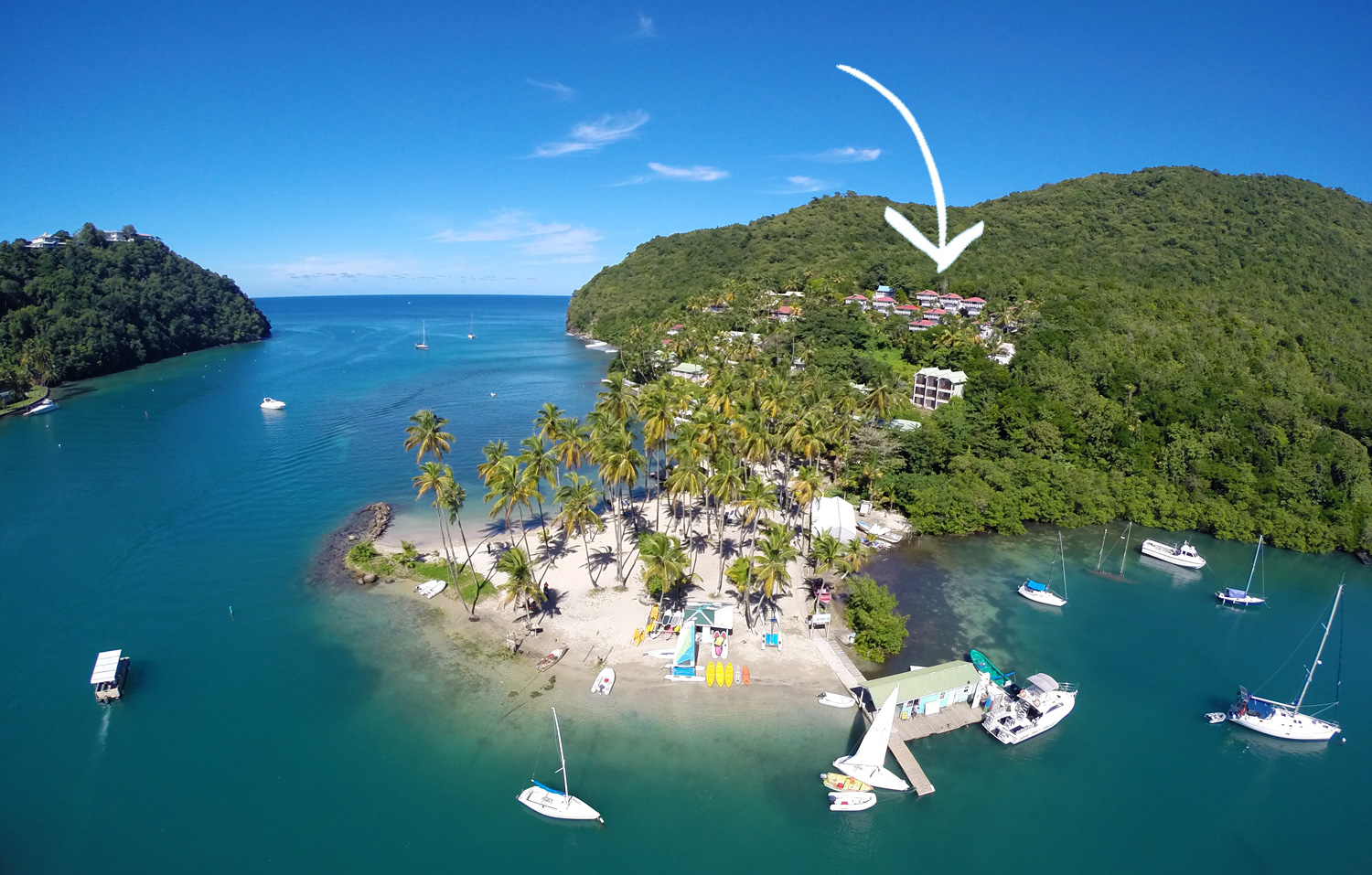 So… if you were wondering how we managed to secure the best spot in the bay… that’s why! 😉

Although the bay has changed a lot over time, it’s still a very peaceful and pristine bay that represents the authentic Caribbean. There’s plenty of nature and green rolling hills around, and up behind our Vacation Club community there’s even a hiking trail that takes you up the ridge towards the ocean.

Marigot Bay, situated on the midway down the west coast of St. Lucia, is a perfect central hub for people looking explore St. Lucia. You can enjoy the quiet of the bay, watching the ships go by from your balcony, grabbing a bite to eat by the water’s edge, or relaxing on the quaint little beach – but from Marigot Bay you’re also in the perfect position to explore the rest of the island and all its treasures to the north and south – like Pigeon Island National Park, Rodney Bay, Soufriere and the Pitons, and more!

We consider Marigot Bay a perfect vacation destination for travelers who wish to be “away from it all” but still not too far removed from all there is to do.