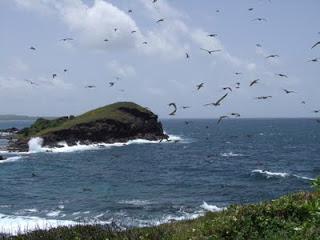 During the summer months, seabirds from Africa migrate across the Atlantic to the Maria Islands at the southern tip of St. Lucia to nest and breed.

Four of us, including our intrepid St. Lucia bird watching guide, ventured to the Maria Islands (major and minor) around this time for an up-close bird watching experience. Who would have thought we would have ended up saving the life of a bird? 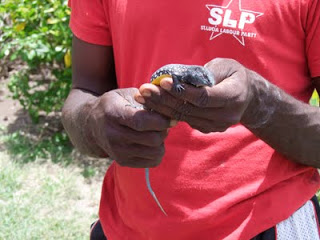 We arrived on the rocky shores of the island in a rickety fishing boat. The heat was sweltering. Our guide led us up the hillside. Being a St. Lucian, his feet were used to the bare ground, so he went barefoot. Birds flew all around us – so many of them that even the widest camera lens couldn’t capture a fraction of them. You might be tempted to stare up in awe with your mouth hanging open, but this is not advised. Watch out for the endless bird-dropping missiles from the sky!

Our guide showed us a few interesting things along the way, including this St. Lucia Ground Lizard on the left (endangered). These islands of St. Lucia are also home to the rarest snake in the world! It’s called the Kouwes, or St. Lucia Racer (and yes, it’s fast).

We arrived at the top of the island to a magnificent spectacle of swirling, flying birds. We were surrounded by cacti, as the island is so hot and rocky. The volcanic rock beneath our feet was black, sucking up the heat from the sun like a frying pan. 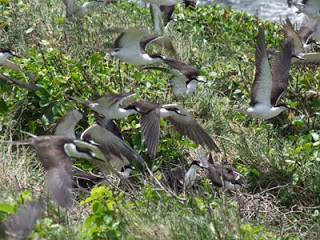 At the top, we noticed a bird flopping around beneath some underbrush and cacti. On closer inspection, we saw that it had taken on multiple cactus needles in its wings, disallowing it to fly. Our guide immediately ripped off his shirt to reveal the golden “S” of Superman… no, just kidding. But he did ask me for my shoes so he could walk through the cactus-covered ground to rescue the bird.

I obliged him and watched in captivation as he set out across the blanket of sharp needles to the where the bird lay. He picked it up and tenderly began removing the cactus needles. I would have surely enjoyed the spectacle even more if my feet were not sizzling like bacon on the black rock, forcing me to dance around like I was summoning rain from the gods.

Our guide decided to take the bird home for a while, as it was still unable to fly. He did so, wherein we later found out that he successfully rehabilitated the bird in his own home, and then released it.

This is the kind of gentle, unselfish outlook we should all have towards our natural counterparts.