Get to Know Our Island of the Caribbean!

Below we share some good-t0-know information on the island of St. Lucia that will help you jump into your vacation with a little more confidence! And if you have other questions, our team here at Oasis Marigot will always be happy to answer them! 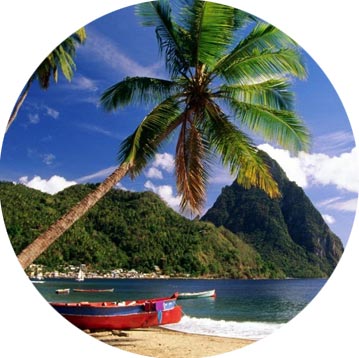 Driving: We’ve partnered with Budget Car Rentals to be able to offer our guests a 10% discount on car rentals. Foreign drivers need a national license or an international driving permit in order to obtain a requisite local driver’s license. In St. Lucia, driving is on the left-side of the road.

Taxis: We help arrange taxi pick-up services for all our guests to and from the airport. Taxi rates between the airport and various places across the island are set by the government, and depending where you’re staying we’ll let you know how much your taxi ride will cost in advance – and this is the only rate you should be charged. For other taxi rides just getting around, rates can be pre-negotiated with the driver.

Economy: Though tourism has been growing rapidly, the principal business sectors remain those of agriculture (especially bananas and coconuts) and manufacturing, with over 40 relatively diversified enterprises.

Electricity: The electric current is 220 volts AC, 50 Hz. Plugs are 3 prong. We offer adapters at all of our villas in Marigot Bay. Virtually all other villas will also include adapters, but if you have many devices to plug in, you may wish to bring some of your own. Visitors may wish to bring their own voltage and plug adapters.

Emergencies: Throughout the country, the number to dial for all police, fire, and medical emergencies is 911.

Geography: The second largest of the former West Indies Associated States, the avocado-shaped St. Lucia lies between Martinique and St. Vincent in the Windward Islands chain of the eastern Caribbean. It sprawls over a total area of 616 square kilometers (238 square miles), covered with dense tropical flora, such as hibiscus, frangipani, orchids, jasmine, and poinciana.

Government: Constitutional monarchy and member of the Commonwealth. Executive power is vested in the British monarch, who is represented by a governor-general. Parliament consists of the 17 elected members of the House of Assembly and the 11 appointed members of the Senate.

History: For over 164 years since 1660, the island exchanged hands 14 times between the French and British. Although the island gained control of its own government on 22 February 1979, its official head of state still remains the British throne, represented by a governor general who appoints the 11 members of St. Lucia’s senate. The House of Assembly is elected by popular vote. St. Lucia has given birth to two Nobel Laureates: Sir W. Arthur Lewis won the Nobel Prize in Economics in 1979 and the poet Derek Walcott won the 1992 Nobel Prize in Literature.

Passport/Visa Requirements: Visitors must carry valid passports. Visas are not required where the visitor is a citizen of the USA or certain Commonwealth countries, or where there is agreement for exemption between the home country and St. Lucia.

Religion: About 80% of St. Lucians are Roman Catholic. Other denominations include Anglican, Methodist, Baptist, Seventh Day Adventists, Church of the Nazarene, Christian Science and the Salvation Army.

Taxes: Hotels and restaurants charge an 10 percent government tax, as well as a 10 percent service charge, both of which are sometimes included in the quoted price. There is no longer an airport departure tax.

Tipping: Tips of 10 to 15 percent are customary. If a service charge is added to the bill, any further tipping is discretionary. Ten percent is acceptable for taxi drivers and approximately EC$2–3 or US$1 for each piece of luggage a porter or bellhop carries.

Weather: St. Lucia’s climate is hot and tropical, with an average annual temperature of 26° C (79° F) and mild trade winds for a good portion of the year. The average annual rainfall is 152 centimeters (60 inches).

Oasis Marigot is a proud supporter of the St. Lucia Hotel and Tourism Association.

To/from the airport, or around

Enjoy 10% off through Budget

Arrive to a fully stocked fridge!

A helpful overview of the island

Find the best spots to eat